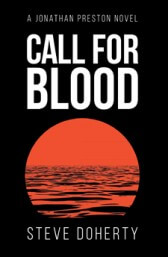 After King Cobra succeeds in raiding prisoner-of-war camps and freeing hundreds of Allied soldiers—killing Japanese sibling agents in the process—Preston and his colleagues must also evade the team of elite Japanese assassins hell-bent on their demise.

A gripping tale based on actual US counterintelligence missions, Call for Blood explores the little-known crimes and atrocities committed by Unit 731 and gives readers a front row seat for one of the most fascinating dramas of World War II.