Imminent Threat: Did Biological Warfare Begin in Greece in 430 B.C.?

The following is an excerpt from Chapter One of Imminent Threat.

King Archidamus and several of his generals were once again preparing the Spartan army to move against Athens. They were at the port city of Hermione when twenty North African galleys entered the harbor with mercenaries willing to fight for Sparta. As was the custom at Spartan ports, a physician, or one of their aides, would check the health status of the arriving soldiers before allowing them to come ashore. If any disease showed up aboard a vessel, the galley was sent away.

General Brasidas, the second-in-command of the Spartan army, turned to a lieutenant who approached him on the dock—and took his report.

“You say we have a galley full of mercenaries that are too sick to join our army?”

“Yes, general. Twenty ships arrived from Carthage, yesterday, loaded with mercenaries. On one of the ships, almost all the soldiers and a few of the sailors were too ill to muster for the health inspection. The port official who inspected the mercenaries says all are affected by a high fever. Their symptoms are severe headache, extreme fatigue, vomiting, diarrhea, and stomach pain. According to the captain of the galley, the onset of the disease was sudden and happened a day out of Hermione. The port physician wants to send the boat back to Africa. He fears a plague.”

General Brasidas thought for a while, contemplating the situation. “I have a better idea. Have the captain sail for the Athenian port of Piraeus. We’ll make it a problem for Athens, not Sparta. If any other boats have sick men, send them too. With any luck, they will spread the plague in Athens, and we won’t need to fight them.”

“But that is unethical, sir. That’s not our way of waging war.”

“Athens refuses to fight us in the field, man to man,” General Brasidas growled. “Let them deal with these sick men. We are not equipped to heal them. After all, Athenians are the ones who boast about being good humanitarians and having the best physicians in the world. Let them prove it.” 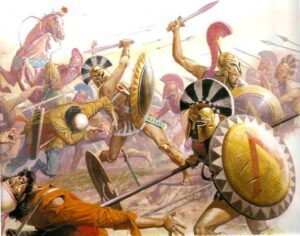 Imminent Threat by Steve Doherty – Historical Fiction with a Twist